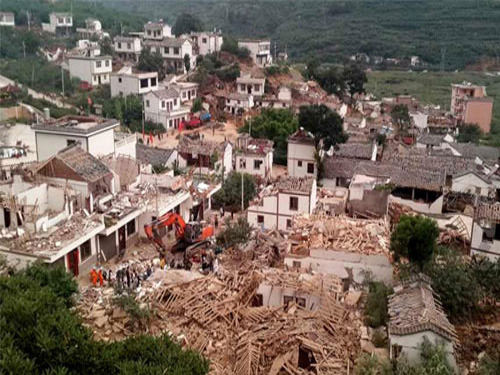 At 16:30 on August 3, a 6.5-magnitude earthquake occurred in Ludian County, Zhaotong City, Yunnan Province, with a focal depth of 12 km. At 7 o'clock on the 4th, the earthquake killed 381 people, including 302 people in Zhaotong Ludian County and 1 in Zhaoyang District; 66 in Qiaojia County; and 12 in Huize County, Qujing City. To protect an industry that is closely related to the safety of human life, what role will security products play in the earthquake? From the security warning before the earthquake, the video surveillance in the earthquake rescue, life exploration, and the remote disaster relief command system in the personnel rescue. Security provides technical support for the emergency rescue work of crisis events.

The searched buried life detector works by testing the subject's breathing movement or movement. Because of the low frequency of breathing, which is generally 16 times per minute, breathing exercises can be distinguished from other higher frequency sports. The principle of measuring movement is also roughly the same. The Super Vision Security Systems antenna is one of the two Mars Rover Geology Radar antennas designated by NASA. It is capable of very keenly capturing very weak motions. With powerful algorithm processing, it is a safe lifesaving. The best helper in the department. During the search and rescue of the Sichuan Wenchuan earthquake on May 12, 2008, experts from China and other countries around the world used life detectors to detect and rescue tens of thousands of trapped compatriots.

1, infrared life detector can withstand the harsh conditions of the rescue scene, can search for life in the smoke, fire and dark environment after the earthquake. The infrared life detector detects the heat of the victim's body. The optical system converts the received human thermal radiation energy into an infrared sensor and converts it into an electrical signal. After processing, the infrared thermal image is displayed on the monitor, thereby helping the rescuer determine the death. The location of the person.

2. Audio Life Detector Audio Life Detector applies the principles of sound waves and shock waves. It uses advanced microelectronic processors and sound/vibration sensors to collect vibration information in all directions. It can detect various sound waves using air as the carrier. In addition, vibrations with other media as the carrier and non-target noise waves and other life detector background interference waves are filtered to quickly determine the location of trapped persons. The high-sensitivity audio life detector adopts two-stage amplification technology. The probe has a built-in frequency amplifier. The receiving frequency range is from 1 to 4000 Hz. The host computer receives the target signal and upgrades and amplifies it again. In this way, it can determine whether or not life exists by detecting the sound waves and vibration waves generated by weak, underground people such as trapped, shouted, crawled, and beaten.

3, radar life detector is a fusion of radar technology, biomedical engineering technology in one of the life detection equipment. It is mainly made by using the principle of reflection of electromagnetic waves. By detecting various micro-motions caused by human life activities, information on breathing and heartbeat can be obtained from these micro-motions, thereby identifying whether there is life. Radar life detector is currently the most advanced life detector in the world. Its active detection method makes it difficult to be affected by factors such as temperature, humidity, noise, and site topography. The continuous emission mechanism of electromagnetic signals further increases its regional detection. The function.

In the event that roads are blocked and expert doctors cannot quickly reach the disaster site to rescue them, the telemedicine consultation system breaks the limits of space and space, and sends valuable expert medical resources from the rear to the frontline of the disaster area in time, which can provide timely assistance to compatriots in need of rescue in disaster areas. Authoritative medical guidance. The telemedicine system is a comprehensive modern communication technology, medical imaging technology, multimedia technology and network transmission technology to provide long-distance medical information and services, including all medical activities such as remote diagnosis, teleconsultation and nursing, distance education, and telemedicine information services. The telemedicine system connects the multimedia communication system with the **medical information system at the service level; realizes the interconnection and intercommunication of video, audio and data and medical services of the alliances at the functional level; and implements the operating room and medical training room at the application level. , diagnosis and treatment rooms, radiology departments and other departments of the full interoperability. In recent years, the country has attached great importance to the application of telemedicine, and has also continuously increased the reform and investment in the medical field, making telemedicine a very important vertical market for the professional audio and video industry. In disaster relief activities, the telemedicine system fully exerted its role of rear-end medical support. The telemedicine satellite sites and the medical team's mobile telemedicine equipment in the affected areas successfully conducted multiple telemedicine consultations. The telemedicine system also transmitted first-hand information such as dynamic video and audio information for medical treatment in the affected areas directly to the command group of the Ministry of Health and the military relief headquarters of the former military region at the first time, so that the earthquake relief command can be timely Understand and master the first-line treatment situation, and play a role in front-rear medical treatment information communication and online command coordination.

As an auxiliary system for earthquake relief emergency liaison command, the video surveillance system, video surveillance, video conference and other data communication systems play an important role in the notification of dangerous situations, command and rescue, and emergency assistance, and it is a traditional voice communication system that cannot be replaced. In addition to video surveillance and video conferencing systems, converged data communications services such as telemedicine and distance education have also played a significant role in earthquake relief. The video surveillance system provides a great deal of first-hand on-site information for emergency commanders in the fight against earthquakes. In addition, the wireless video transmission system is also an assistant to the rescuers. It not only photographs in places where people cannot enter and returns images in real time, but also enables remote consultation when rescuers are injured.

As a remote sensing platform, a remote sensing aircraft loads various sensors. Set different windows in the belly to facilitate observation of the earth. Such as the installation of aerial camera, multi-spectral camera and various scanners, radiometers, altimeters and so on. In addition to conducting remote sensing tests and production operations, remote sensing aircraft are also used in simulation tests of various satellite-borne remote sensing instruments to collect data for testing and improvement of spaceborne instruments. Multi-spectral aerial photographs can be obtained from aeronautical multispectral scanners, with much more information than single-band aerial photographs. The aviation side-looking radar emits microwaves from the side of the aircraft. After encountering the target, the backscattered return pulse is scanned and displayed on the display and recorded on the film to generate a radar image. In an earthquake, a remote sensing aircraft is equivalent to a "digital camera" capable of conducting high-altitude operations and shooting local disasters in real time.

Preservatives are a class of food additives that inhibit microbial activity and prevent food spoilage. In order for food to have a certain shelf life, certain measures must be taken to prevent microbial infection and reproduction. Practice has proven that the use of preservatives is one of the most economical, effective and simple ways to achieve the above objectives.
The Preservative principle of preservatives is roughly as follows:
First, it is an enzyme system that interferes with microorganisms, destroying its normal metabolism and inhibiting the activity of enzymes.
Second, it is to coagulate and denature proteins of microorganisms, and interfere with their survival and reproduction.
Third, it is to change the permeability of the cell serosa, inhibit the elimination of enzymes and metabolites in the body, leading to its inactivation.